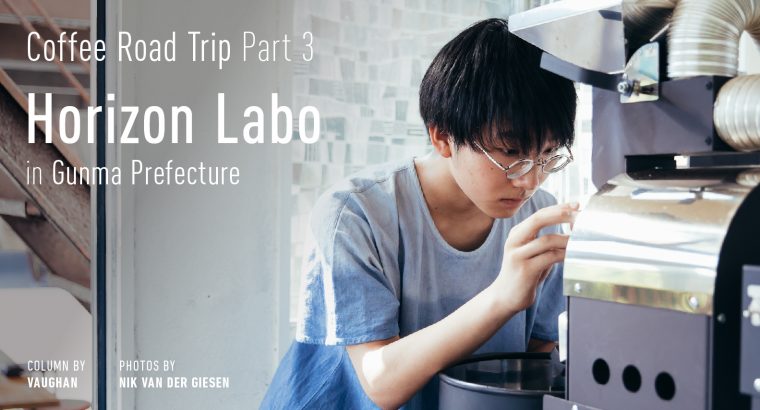 “Did you hear about the fifteen year old who started his own coffee shop in Gunma?”
“Wait… Did you say fifty or fifteen?”
“Fifteen. One Five.”
“No… I didn’t…”
“Yeah, I heard he wasn’t doing so well with his schooling…. but turns out he is doing really well with coffee.”
“Wow. I want to know more.”

That was probably the shortest conversation I’ve ever had before deciding on an interview. Naturally, I quickly made contact! And soon after, we were off to visit HORIZON LABO in Kiryu city, Gunma Prefecture. It was time for our 3rd road trip!

We sat down with Hibiki Iwano (15-year-old Coffee Roaster) and his father Haruhito Iwano at Horizon Labo. It was a hot day in August 2017.

Hibiki’s story with coffee begins at a very young age… but this story is not a once upon a time one… in fact it all started just a few years ago. Hibiki can remember enjoying making drip coffee for his parents while still a young elementary school student. And he practiced a lot, because his parents drank a lot of coffee. And still do. Made by Hibiki.

Haruhito remembers buying a lot of coffee equipment at home at his son’s request – a french press, various drippers and even a mini espresso machine, and says: “We were worried a bit about our child having caffeine and all, but we thought a little bit wouldn’t hurt.”

Hibiki was different from other boys from a very young age. He wouldn’t watch any anime on TV, instead he would only watch National Geographic documentaries. At school, he couldn’t copy things down properly from a blackboard, was unable to grasp the sense of distance between objects, and couldn’t go to the bathroom alone. Naturally, he couldn’t really connect with anyone his age, and found it impossible to keep up with the rest of the class.

When Hibiki was 8 years old, in the 3rd grade of elementary school, he was diagnosed with Asperger syndrome.

And so at the age of 13, it was decided that it would be better to stop going to school.

Soon after, Hibiki was given a small 1kg coffee roaster as a gift, and his fascination with the roasting process grew day by day. “I realized the infinity of flavours there are to discover in coffee… I really like that part…. that there’s no end.”, Hibiki recalls.

In April of this year, Horizon Labo opened; a laboratory on top of a small mountain where Hibiki looks over the horizon while immersing himself in his keen interest of roasting and brewing coffee. People started to hear about his story and began visiting. People started telling Hibiki that his coffee was really delicious… and that positivity has had a huge effect on him.

His shop would open only between the 1st and 7th of each month, and for the rest of month Hibiki would continue to study roasting, and do other coffee related activities.

In July this year, Hibiki’s parents took him on a trip to Nepal to visit a coffee farm. Hibiki wanted to see first hand what a coffee farm was like. It was a wonderful experience for him.

A few months ago, Hibiki had the chance to meet coffee legend Daibo. And since then, they have been exchanging hand-written letters to each other. Daibo often reiterates to Hibiki-san something very important: “When it comes to coffee, you make your own taste by yourself… it’s not supposed to be this way or that way…  and there’s definitely no such thing as perfect.” Daibo writes about coffee, but the letters are more about a certain spirit in life. Hibiki shows me Daibo’s letters (written beautifully in blue ink) and says: “I’ve already learned so much from his words. I keep them in a special place.” Hibiki’s father comments how lucky the family feels to have had the chance to understand Daibo’s spirit through personal letters.

So, word got out about Hibiki’s amazing turn around in life and the 1st to the 7th of each month became busy at Horizon Labo. So busy that a queue down the hill would form. The family remains extremely humbled by this as his parents never expected this at all – all they wanted to do was to try to focus on the good things. Hibiki tells us about a lovely customer who visited him all the way from Sadogashima. There have even been customers visit from China and Thailand too. I might be the first Australian. I guarantee them that I won’t be the last.

Sadly though, the crowds became so large that Hibiki and his family started to worry that they were disturbing their neighbours. Hibiki and his parents, really more than anything, just wanted their customers to relax over a cup of coffee at Horizon Labo… but with so many people, that became virtually impossible. And so they all felt that closing the shop until further notice would be best, and to just allow Hibiki to focus on roasting coffee, and the online store.

These days, Hibiki’s parents continue to introduce him to many different things in life and let him “feel” something for usually a couple of weeks, sometimes more. He has made broaches, worked with ceramics, and even woodblock prints. “This is HIbiki’s Lab, we let him touch, try and experiment with many things” says his father.

It’s an inspiring story. A story about a loving, talented mother and father, who are feeling and acting the best way for their son. As a father myself I have learned a lot about life and parenting through the time I spent talking with Hibiki’s father. They focus on the positives, and light up the path for the their son to explore a beautiful world. Hibiki also has two siblings – watching the way he is living. And they are beginning to think about their own lives too.

It’s roasting time. We watch Hibiki roast coffee, with unerring concentration, for close to 30 minutes, and he then brews us a beautiful blend.. and have coffee time… a special coffee time while looking out over the view of Kiryu.

When it’s time to go, we say thank you to Hibiki and his father for their time, and they continue to wave to us as we drive away down the hill…

We drive about 15 minutes to Nils, a beautiful restaurant for lunch. Owners Yuko and Keisuke (brother/sister team) are actually using Hibiki’s beans on their coffee menu. They started using his beans right from when he started roasting, and say that they are always excited to receive new beans each month.

Signing off now. This was road trip number three. It’s a beautiful story of the power of coffee, wonderful parents, and a young craftsman that I know will have the brightest of futures.