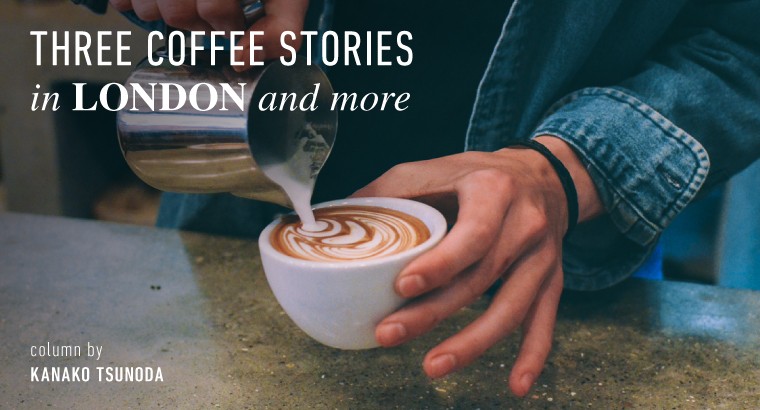 At the end of last October I visited London and fell in love with the landscape – vivid red buses run among beautiful white traditional buildings. I have grown fond of London’s atmosphere, but what about London’s coffee?

Let me tell you three stories about coffee in London.

We decided to go to Workshop Coffee to talk over a coffee. I knew the name, and I had a kind of image of the shop in my head, but as always no photo or review can replace a visit. There was a neon sign above the entrance, black steel walls, inside the cafe was a bit dark. People were chatting, and the baristas were busy. I don’t know why, but I tried to imagine all the new ideas that were born here over coffee, perhaps inspired by this cafe’s uniqueness. Rosa was at the counter, and when her eyes met mine she shot me a big smile. I liked her instantly. Rosa used to work at Apple as a recruiter, but after coming across cold brew, she changed paths. Together with her friend Beckey, they started Goodbeans, a cold brew coffee shop set up for BtoB and BtoC in 2013. She said the way cold brew was served in glass bottle in San Francisco really caught her eye. “I have always loved iced coffee but this was something different.” A couple of days later I went to Borough Market where they were doing a pop up and I saw Rosa in action. She speaks to all of her customers as if they were her friend. She said part of the pleasure comes from meeting people and building fun-loving relationships – with roasters, retailers and customers. You don’t feel nervous when you speak with Rosa. At the same time however, Rosa is very serious about coffee. When asked what coffee was to her, she answered: “Coffee is a moment for the senses, to focus on taste and smell – to stop and take a moment to enjoy.”

Espresso by K2 w/ Will

After visiting Workshop Coffee I dashed over to Espresso by K2 to meet Will. Recently together with his friend, he started a coffee shop. On this particular day though, he was helping out at Espresso by K2. Will brewed me a chai tea latte and we chatted about his new business. His coffee shop’s name is Routes Coffee. “I think I was born with the traveling bug – I want to see the world.” he said. Before he got into coffee, he was working part time at a sports club. One of the regulars at the club gave him an opportunity to learn about coffee in Sydney. Two weeks later he was behind an espresso machine, and from there his excitement and newly found passion took him around Asia and Europe. It is clear his routes are in traveling and it shows in the style of his coffee shop: “It’s in a van.” Through his style he can travel, earn money, do the thing he loves, and spend time with his friends – all at the same time. Will tells me that he doesn’t think that customers are just people who pay money. On the contrary; “Coffee has given me the opportunity to meet people who I will never forget.” Will is on a journey through life with coffee.

The final coffee time was with Audrey, who is a coffee writer. I had translated some of her coffee articles before, but we’d never actually met in person. It was really great to finally meet. And so we walked around Shoreditch whilst talking coffee. I always knew that she loved coffee, but I was really surprised by just how inquisitive she is. I suppose that’s what makes a good journalist. “Coffee for me is so much more than a caffeinated drink,” she said, “it’s a part of cultural and social experience.” When I asked why she liked coffee so much, she replied by saying that despite the fact that it’s hard to make a big profit selling coffee, there are many baristas that love being in the industry. It’s not only about money. Furthermore, Audrey is always amazed at how different people come together to produce the best flavor out of a single bean. Audrey has a really good understanding of the differences and trends of both coffee in Japan and here in London – I’m a big fan of her writing. She talked to me about Japanese coffee shop owners standing behind counter serving coffee, as opposed to sitting in an office room. This is quite rare in London. She goes on to explain about coffee masters in Japan sharing their coffee approaches without any sign of rivalry in Japan, and people in the industry being quite serious in regards to honing their craft. Listening to this while watching the dynamics of a cafe in London, it became pretty obvious that the two cultures are completely different. It’s a lot more casual in London, baristas would often joke around with each other and you could see that they really enjoy their work. I liked London’s style a lot. It was interesting talking about this difference.

Thank you to Rosa, Will and Audrey for having coffee with me in London! And thank you so much to Masa for introducing me to all the coffee lovers. It was fun to think about why various people like coffee so much. It’s the morning savior, but can also be an art or a passion, or even that perfect tool for meeting someone special – like the three of you!!!