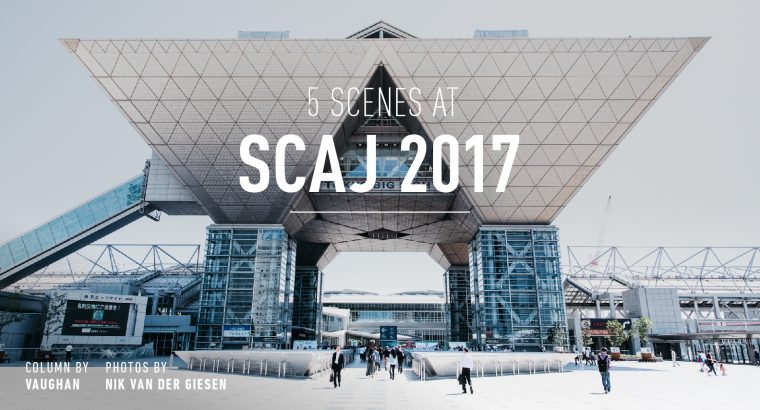 SCAJ is Asia’s biggest coffee event, held annually at Tokyo Big Site. It hosts the Japan Brewer’s cup at one end of the hall, and the Japan Barista Championship at the other. In between, there are tons of booths showcasing the movers and shakers of the industry – everything from the latest espresso machines to new trends in cafes. We tried to stay low key this time… here are a few things that caught our eyes.

Slayer handpicks 12 roasters over the 3 days, each roaster steps up to the plate to use Slayer’s latest machine to pull the shots for the fans. The newest machine has lots of customized settings, as well as a new steamer, which steams at double the temperature, bringing out a lot of sweetness in the milk. “It’s the best machine for steaming milk”, said barista Suzuki Narimasa from Baristart, who had flown down from Sapporo for the event. We’ve always loved the design of the Slayer – Check it out!

At last year’s SCAJ do you remember we uploaded a video of a robot making a pour over from start to finish? We were all blown away… so much so that we started to worry about all our barista friends being out of the job sooner or later. Anyway, that aside- we were gob smacked again this year, to see Chinese firm “Bubble Lab” back with their second prototype, a smaller version, and one that is definitely more marketable. It has a built in camera/ sensor that finds your dripper and centralizes the pour perfectly. It’s set for mass production in quarter one or two of next year. While listening to CEO of Bubble Lab Tony Jiang tell me all about it, I simply watched in awe and said: “You’re amazing!”, to which he replied: “No, I’m exploring!”… Check it out!

We love the classic design of the batch brew MoccaMaster – which was designed in 1974 in the Netherlands and is still made there today. Approved by the European Coffee Centre, water comes out at 96 degrees, it makes about a liter of coffee in about 10 minutes, and will keep your coffee at a temperature of 85 degrees. You can use basically any type of paper filter, and it’s super easy to clean and maintain. It goes for just over 50,000 yen. If you’re in the Yanaka area, pop into Kayaba Stand (part of Kayaba bakery) to see it in action. Check it out!

Launching last month, Ecopresso is basically a coffee cup made out of a baked cookie. Which means you get to have your cup and eat it too… if you know what I mean. We had a macchiato in a butter flavored cup, which had a little bit of icing on the inside of the cup, acting as a sweetener. Check it out!

If there’s one stand at SCAJ that produces interesting flavors, you really couldn’t look past Maruyama Coffee. They had four competitors represented in the Barista Championship this year, and another three baristas participating in the Brewer’s Cup. While the competitors weren’t on the stage competing, they were making and talking coffee at the stand. We chatted with Hitomi Shima who told us about the washed Geisha she was using from Hondurus in her presentation. It had floral, lemongrass, and rasperberry flavors and with a silky mouthfeel… it was the coffee that we left SCAJ talking about. Check it out!