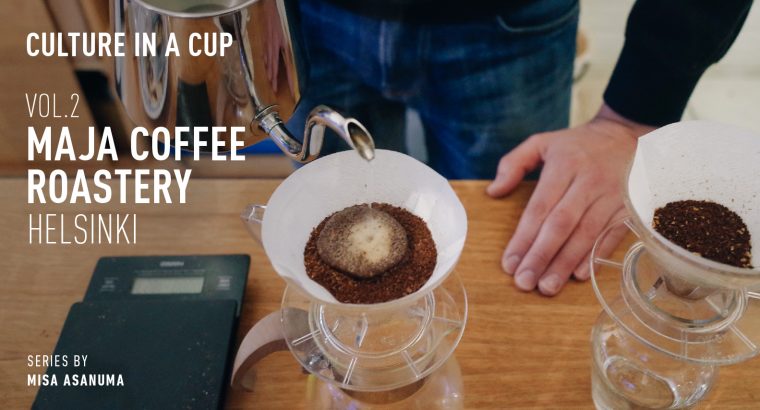 In my second installment, I head to Maja Coffee Roastery, a micro roastery located in Lehtisaari, on the outskirts of Helsinki. I was lucky to have the chance to talk to owner Tapani and his wife Kaya-san.

<The interior with warmth of woods are designed and made by their own.>

— Please tell us a little bit about yourself.

Tapani: Almost 3 years ago, we opened the cafe and roastery here. I originally work as an Art technician in a private sector. placing artworks in musuems, directing exhibitions, as well as doing wood works myself. I actually also worked in Japan for around 2 years.

— So, what made you decide to open a cafe and roastery?

Tapani: Coffee is simply my hobby! When we visited APONY, in Imabari, Ehime (my wife’s hometown), it was really the first time I had ever tried freshly roasted coffee. So it was actually in Japan that my story started. The owner of APONY is so knowledgeable about coffee, so I learned so much from him. Soon after, I started roasting at home.

Kaya: It’s actually been 10 years since we have moved here to Helsinki. At that time, there weren’t many places that roasted their own coffee beans and served them at cafes themselves. It was pretty much only Kaffa Roastery back then.

— I thought coffee culture in Finland had matured long before… I remember hearing that coffee consumption is so high here in Finland compared to other countries.

<Besides at their cafe, Maja often offers beans collaborates with museums in Helsinki. At Helsinki Art Museum for Kusama Yayoi’s exhibision in 2016 and Juho Rissanen’s exhibition at Didrichsen Art Museum where is their neighbour this year.>

Tapani: Over a hundred years ago, there were already over a hundred micro roasters. Also many people are known to roast coffee by themselves at home…coffee consumption was said to be at about 2 kg per person per year. Then in 1904 Paulig was founded in Finland. Paulig is quite a big company and so naturally the number of micro roasters decreased over time….but now, micro roasting is back booming again!

Kaya: Tapani took part in a Coffee competition in Finland..and placed 4th with beans roasted in our garden.

— In your garden?! Sounds so cool. So the first thing that you especially got interested in was roasting?

Kaya: Actually when we arrived in Finland, we basically wanted to open a cafe. But yes, as we are both associated with and work for Art, “creating” something by ourselves has always been the fundamental interest. When you think about coffee and you want to create a certain taste, you have to think about roasting.

— Why did you choose Lehtisaari?

Kaya: Didrichen museum is our neighbor! Just as were moving to Helsinki, Tapani was associated with the exhibition of Henry Moore and we joined the opening party. At night, it was quiet and that together with the sculptures in the garden, made it such an enjoyable atmosphere. This is how we found this area. Lehtisaari is so attractive. After that, we walked around the area and found this place to be home for our cafe. In Finland, there are often certain limitations when roasting. We were so happy to find a place that didn’t impose any restrictions… the only thing is that we’re a bit far from the center of town…

— I like this neighbourhood a lot as well. When I visited you for the first time, I remember falling in love with the area- it’s so calm here and you’re surrounded by beautiful nature.

Kaya: We thought people wouldn’t come, as we’re a bit out of the way. To be honest though, our goal was never to make sure our café was packed with customers – we have always just been motivated to roast well. But against the odds, we noticed more and more people taking interest in us. Maybe people started to think of us as a kind of secret base away from the city. “Maja” means a tiny hide out which children made in Finnish.

— Of course, there’s lots of good coffee to discover in the center of Helsinki, but it’s more like “I’ve found that hidden gem!” when you come here.

Kaya: Guests seem to want to come again after visiting the first time. They know who we are… they know where we are… then they come back to visit us. That might be what it is. As I said, we didn’t expect this… it really is such a nice surprise for us. Yes, if guests were only after a good cup of joe, they needn’t come all this way. Here, we have happily been blessed with encounter after encounter… we feel so grateful to have been given the chance to build close relationships with so many lovely people. This is one of reasons why we have continued to be able to run the café..

Tapani: We also have great relationships with other coffee shops in Helsinki. Before the opening of our cafe, I had already started roasting. At that time, Helsingin Kahvipaahtimo (Helsinki Coffee Roastery) has lent us their roasting machine. Regarding buying green beans, we are still too small to buy whole pallets. When Good Life Coffee, Kaffa roastery and some other roasters order green beans from the warehouse of Nordic approach, they manage to ship and share some green beans with us. In the coffee scene in Helsinki, we have this kind of warm atmosphere in our connection with each other, rather than being competitors.

— Is there any reason for not using an espresso machine?

Tapani: I drink espresso beverages when I visit other coffee shops, but I’m not really interested in offering it at my shop. All of our friends who are roasters suggested that it would probably be best to offer espresso-based drinks. In fact, for example at Kaffa, serveral cappuccinos or lattes can be made while just a single cup of siphon coffee is brewed. Espresso-drinks have that advantage to attract customers, but having said that, hand brewing is getting more and more common recently. For me, it was somewhat natural to focus on hand brewing as my history in coffee dates back to when I was in Japan.

Kaya: Drippers and other many coffee equipment are produced in Japan… it may be a reflection on the nature of Japanese people… that people are willing to go great lengths to improve their technique in order to make something the best.

<At Maja, KONO is used for brewing. From my experience, I’ve never seen any other coffee shop using KONO in Europe except here.>

— Could you pick up your favourite coffee places in Japan?  As you have lived in Japan and visited a lot also, it could be a bit difficult though.

Tapani: The experience at Time Coffee (待夢珈琲) in Gifu pref, was impressive- the taste was something completely different from what I had ever known. cafe vivement dimanche in Kamakura is also great. They not only sell beans and coffee equipment but they also sell CDs and some apparel too – which helps show the owner’s personal tastes and character. That’s always interesting for me to see. In Tokyo, Omotesando Koffee (now Koffee Mameya) was impressive. Their service was not only friendly but they were just so knowledgable about coffee and so attentive to each and every customer.

Kaya: In Japan, especially in Kissa-ten, I feel like calling people there マスター(master), as opposed to a barista. Each place where Tapani has mentioned has their own established style and taste – which comes from their abundance of knowledge, experience and philosophy for coffee. Talking with them is so enjoyable and we can all learn a lot from them. I feel their personality is directly reflected in the style and feeling of their café… and that’s the thing which makes each Kissa-ten so unique. A kissa-ten is so much more than a place to have a cup of coffee at.

—You started working in coffee as a casual hobby but have continued it for so long even though you have been quite busy.

Tapani: It’s not only for our guests… it’s also something that I love and need to drink!

— I’ve felt a beautiful marriage of the warm, well designed Finnish-like atmosphere, with Japanese ethics particularly the attention-to-detail regarding coffee. Thank you so much for your time! It’s been such a pleasure hearing your story.

Thank you for reading this small series. Personally, I found each place had their own coffee culture and on a personal note, I also rediscovered just how interesting the Kissa-ten is. Every aspect from the practical things to their ideas, as well as to the contagious coffee passion composed at the cafe intrigued me. At these two roasters an uncanny kind of coffee culture seem to be integrated which added a new charm for me. By being curious about the diversity of coffee and its culture, this beautiful black liquid could take on another dimension…