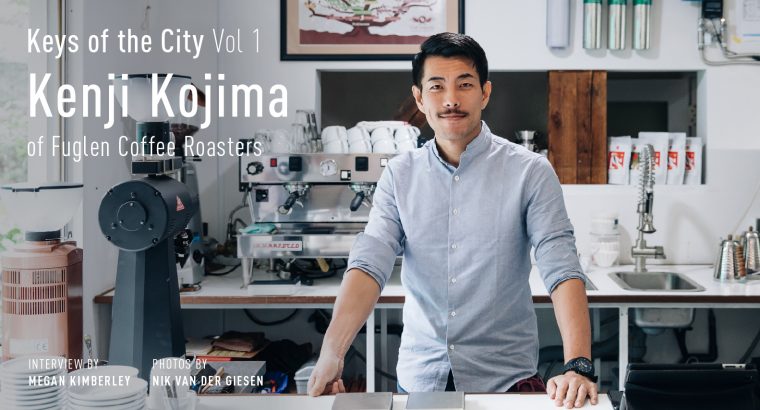 Kenji Kojima’s enthusiasm for the craft of coffee was not immediate. Beginning his career managing an Izakaya in Saitama, Kenji had a health scare at a young age; passing out on the job and vomiting blood due to stress and fatigue. Exhausted by Japanese work culture and frustrated with the inability to create anything, he decided to do something he liked. Kenji liked making coffee, so he headed abroad to Norway to begin his coffee journey.

Years later and sporting a few more passport stamps, Kenji is back on Tokyo soil. He is now the Manager of Tomigaya café, Fuglen and has become one of Japan’s most recognised coffee purveyors. We sat down and chatted about coffee cultures around the world, Fukushima earthquakes, harvests in Ethiopia, and the keys to his success.

Tell us a little about yourself, what you do and how you got into coffee.

I work for a company called Fuglen, a leading specialty coffee roasting company. The original shop is in Oslo, Norway. It’s a café, bar and design boutique. I’m in charge of managing the Tokyo branch, and currently I’m spending most of my time working at the roastery in Shibuya. I started drinking coffee when I was about 10 years old, but not the good stuff – like powdered Nescafe that my Mum made for me every morning with milk and sugar. We would eat it with toast like a typical Western breakfast. She then trained me to make coffee, and we realised I was quite good at it so I started to make it every morning. This was when I started to really like making coffee. Even now this is still my favourite kind of coffee to have – the one I make in my house while eating toast and watching the news. I’ve progressed from Nescafe though luckily.

Tokyo has a number of specialty coffee spots, yet Fuglen has become a huge hit amongst coffee lovers in Japan since it’s opening in 2012. What do you think is the key to its success?

There’s no Norwegian coffee culture in Japan, so it’s kind of unique. I think the atmosphere and the fact that we’ve really mirrored what the café is like in Norway sets it apart. The outside seating and relaxed atmosphere plays a part too. In Norway they need the sun, so they like to spend time outdoors. I think also because we have not only coffee – we have cocktails at night and we are a furniture shop too. So this makes it quite unique I think. My partners in Norway designed everything too, so I guess it’s totally different to Japanese style. We also don’t do much advertisement; we’ve never paid for any advertising. Our reputation has spread a lot because we’ve always kept the brand strong. The first six months were a little rocky as we didn’t have many customers, but then Brutus Magazine mentioned us in an article because we were using Aeropress and our popularity picked up a lot after that.

You’ve had a lot of experience working abroad, tell us a bit about that and how it’s influenced you.

I’ve lived and worked with coffee in Norway and Japan. I still remember finding the Espresso too bitter and acidic when I first arrived in Norway. It was like squeezing a lemon into a coffee. Initially I thought I couldn’t work there because I didn’t like the coffee, but after one month I started to love it and drank it a lot. You can drink many cups because it’s really light and clean. Japanese coffee is much heavier and darker, so people generally use milk and sugar. Norwegian coffee is much lighter; you can almost drink it like tea. The beans we use at Fuglen I buy from a Norwegian company.  Origin is everywhere around the world, but hasn’t broken into Asia much yet. The flavour is really clean and well balanced; it’s definitely my favourite.

As a seasoned traveller, how do you feel the Tokyo coffee scene sizes up in comparison?

One of the reasons I left Japan in 2009 was because I found Japanese consumers really behind in terms of coffee. At that time it was generally a once in a month special occasion to go to a café. Maybe you would meet your friend, take a picture and then leave. Coffee is still quite a special drink in Japan, and the shipping cost of beans is higher than European countries, so the price is higher too.  I think the coffee culture is improving with the younger generation, but still not enough. So my goal is to educate people on the story behind the coffee they’re drinking. Where it comes from, how it’s produced and the overall care that goes into it.

Some could argue Tokyo is quite behind in terms of the number of people drinking specialty coffee when you compare it to other countries around the world. What do you think are the problems being faced in the industry at the moment?

In my opinion, opening a coffee shop in Tokyo is very easy. Yet, a lot of barristers haven’t had enough opportunities at managing a company before. They’re good at making coffee, but not so good at the business side of things. There’s also this belief in Japan that you need to have food with coffee. But there are so many tasty food shops around, so the competition is much higher. I think we need more consumers and people who have an interest in specialty coffee. The lifestyle is so much faster here and people are more poor for time, so are more inclined to opt for vending machine canned coffee or convenience store coffee. Maybe in international countries it’s a slower lifestyle so people feel more relaxed and are happier to sit down and relax with a coffee.

You worked in Fukushima to help out after the 2011 earthquake. Tell us a little about that.

My friend suggested that we go there together to help out in the relief centres. We went to five big centres and spent three days there. It was kind of difficult, in the sense that people would say “we don’t need coffee, we need support and relief services” and that kind of thing, which I could completely understand. People would arrive at the relief centres by buses with no shoes, halfway through applying their makeup and that sort of thing, never to go back to their homes. It was really heartbreaking. Aside from that though, people were grateful. Someone said to me, “now that I can drink coffee, I feel really safe”. It was nice for them to drink coffee with neighbours and talk normally again. The taste of this coffee, the smell of this coffee and the atmosphere of this coffee would remind them of when they were in their homes.

I hear you’ve been quite busy lately visiting producers and farms. Can you explain to us a bit about the process from farm to cup and what you’d like customers to take from your experiences?

I went to Ethiopia, Kenya and Columbia to visit Origin coffee farms. I wasn’t aware until recently, but there is so much work that goes into everything. The harvests need to be watched 365 days out of the year. I also used to have this idea that maybe coffee came from people working in poor conditions, but the people are really happy and well looked after. The industry is quite competitive, in Columbia, the farmers have to look after their workers really well, because they will move on to other farms if they aren’t treated well. I think for customers to know where the coffee comes from really adds to the value. If you have an image of the country and place the coffee comes from, you can say to yourself, “this is why it tastes so clear” or “this is why it tastes so light”.  Because it comes from this place where the workers are really happy and taking really great care of the harvests.

What advice would you offer to aspiring roasters and business owners in Japan?

What I’ve learnt from working in Norway, is the importance of taking care of your employees. Making customers happy and employees happy is equally important. The company system must be fair and simple. Generally people work 8 hours in the day, 5 days a week, but if you work in the food industry, it’s like 10 hour days 6 days a week. Because Fuglen isn’t a Japanese company, the conditions are much better.  Because I have better work life balance, I can focus more on taking care of the staff and the things that really matter. In terms of personal advice; I always try not to regret any decisions I’ve made. I believe whatever decision you make is always a good choice because you can always learn something. I’m always looking forward towards the future, focusing on what I will do as opposed to what I didn’t.

Do you have any projects you would like to work on in the future?

Well, my dream is to purchase a coffee farm in Nariño, which is in the southern part of Colombia. There’s a beautiful little town called Buesaco, where the coffee is simply delicious. I can imagine relaxing surrounded by beautiful nature with a nice cup of coffee.

Describe your dream day in Tokyo.

I would wake up, make coffee (not Nescafe) and watch the news in my house. I would then have breakfast at Path in Yoyogi. After that, I would head to Shibuya, and maybe check out Tsukiji Markets for a seafood lunch. I would then jump on the Yamanote line and head to Ueno, where I would walk around and admire the museums, traditional streets and temples. Come nightfall, I would be in Asakusa enjoying a Sukiyaki dinner. There’s an old restaurant there I love called 米久 本店 (Yonekyu). I would then finish the night at the New York Bar in the Park Hyatt Hotel in Shinjuku with some smooth jazz music and drinks.

Megan is a marketer and writer from ‘down under’ Australia. When she’s not exploring Japan, you can find her taking photographs and eating pizza. @megkimberley