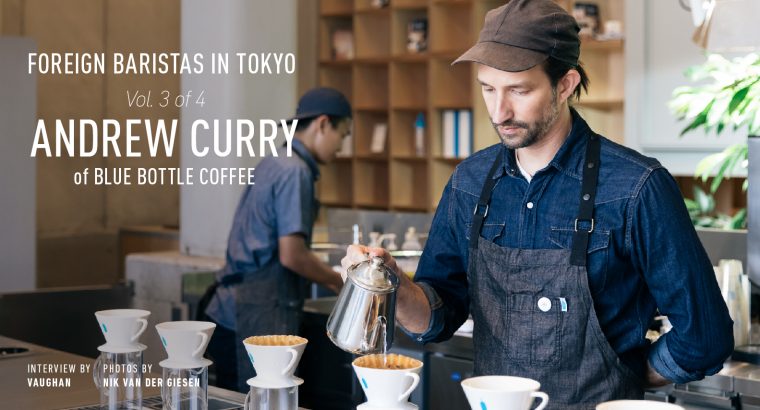 1. Tell us a little bit about yourself, what you do, and the road leading up to coming to Japan with Blue Bottle.

My name is Andrew Curry, and I am a manager at Blue Bottle Coffee Japan. I started my career with Blue Bottle as a barista in 2013 at San Francisco’s Ferry Building. When I first joined the team, Japan was not on the radar yet, but slowly, month after month, information started coming out that, in the near future, there is going to be an expansion to Japan. This news excited me as I had lived in Japan before, and always found myself missing it. At that point I decided that if the possibility arose for me to go to Japan for Blue Bottle, I would definitely jump on it. After about six months, an Assistant Manager positions was created and announced for the store I was in and I decided to apply. I remember telling my then manager that the one reservation I had about the position was that I did not want to accept it, were I chosen, if there was a chance I could go to Japan; I didn’t want start something only to leave the store hanging out to dry shortly thereafter. I was fortunate enough to get the Assistant Manager position, and was even told that my sense of commitment to the team helped shape their decision, which I was happy about. This position allowed me to develop the managerial skills specific to the coffee industry which would ultimately come to benefit me when the time came to apply for a position in Japan. After 9 months or so as the Assistant Manager the time finally arrived when it was announced officially that we were indeed expanding to Japan. I promptly put my name in the running and, in November of 2014, was notified that I would be going over there to help train staff and open our cafes. I was not only humbled beyond measure but also shaking with excitement. I arrived in Japan on December 12th, 2014 to start the journey.

2. The hype when Blue Bottle came to Japan was unprecedented. There were helicopters at Kiyosumi… your beautiful face was on all the train lines… how and why did this happen, and will it ever happen with another company ever again in the coffee industry?

I think it was a combinations of factors. Firstly, James Freeman has always had an affinity for Japan. He has spent lots of time here and he not only deeply respects the people but also admires the craftsmanship, strong work ethic, and the commitment to quality, all of which so fundamentally shape the culture. It is also no secret that James has been inspired by the traditional Kissatens of Japan, and so he often lauds them as the example par excellence of what the coffee experience should be. I believe this deep respect for the culture and sincere authenticity in how he wishes to apply these values to his own shops led to a warm and embracing welcome. Secondly, we have gained a strong and loyal customer base in the States for the quality and consistency of our coffees and the importance we place on our customer service. This helped us gain international recognition and surely made it easier for us to be embraced by Japan. I cannot say whether something like this will happen again, all I know is that with the combination of these factors mentioned above, and the timing in which they unfolded, the community has made us feel very welcome and supported, and for that we are eternally grateful.

3. How would you describe Blue Bottle to someone who’s never been? What can one expect and what’s on the menu?

I would describe our menu in terms of offering just the right amount of choice; For most cafes, we offer two drip coffee choices (rotating between one of our three blends, and one single origin) Espresso, both blend and single origin, Macchiato, Gibraltar, Cappuccino, Latte, Mocha, and Hot Chocolate. Our New Orleans Iced Coffee (brewed with chicory), a straight cold-brew and seasonal iced-drinks as well including sparkling lemonade and a cascara tea based drink. We have quite a delicious food program as well, especially at our Aoyama cafe, which has the most extensive menu.

4. What’s it been like working in Tokyo compared to back home? What type of things are you focusing on over here?

People in Japan have very high expectations for whater service or goods they are paying for, and therefore we need to be on top of our game. What surprised me about this was not the fact that the customer expects this, of course, but rather how thoroughly committed every single barista has been to studying and learning as much as they can, even on their own time, so that they can make the most delicious coffee and offer the best customer service experience to the guest as possible. Of course, this does not mean that our baristas back in the states are not committed, quite the opposite, its just that here in Japan there exists a fabulously strong sense of commitment to the team, and being committed to the team means doing as much as you can personally to constantly educate yourself.

5. Tell us about the coffee culture in Tokyo compared to the states.

One of the biggest differences is the disparity between espresso-based drinks served and drips coffees served. The majority of Americans order milk-based drinks when at the cafe while in Japan it’s heavily weighted towards pour-over coffee.

6. What do you think is the industry’s biggest strength and biggest problem at the current time in Japan?

7. Can you give us some insight in regards to Japanese baristas/staff. Tell us about their attributes and their style of work.

Japanese baristas are such a pleasure to work with. There is hardly any ego and everyone gets a long so well. Like I mentioned before, the harmony of the group is paramount and this leads to a smooth behind the bar workflow.

8. How do you enjoy Tokyo when you’re not pulling shots?

I spend my days shooting photos and waking around Tokyo or exploring other regions around Japan. Time permitting, I try to travel somewhere outside of Tokyo once a month.

9. For those who are coming over to Japan, please curate the perfect day in Tokyo!

I would start my morning off with a siphon coffee and poached eggs and toast at our Aoyama cafe. From there I would walk down the street to Nezu museum to enjoy their beautiful Japanese gardens and take in the large collection of pre-modern Japanese and East Asian art. Next I would make my way over to the Imperial Palace to walk around their expansive grounds and shoot some photos, all the while hopefully building up an appetite for lunch. Once sufficiently hungry I would hop back on the Hanzomon train line and head towards Kiyosumi Shirakawa station. Here I would grab lunch at Kokaibo ramen, which may be my favorite ramen shop in all of Tokyo. After lunch, and to ward off sleep, I would either head to our Kiyosumi Cafe and Roastery, or Arise Coffee for a post-lunch pick-me-up. Of course, if this is your first time to Japan, a trip over to Asakusa to see Sensoji temple, and the surrounding area, is a must and luckily this is roughly just a 10 minute subway ride away. After spending a few hours in Asakusa, I would take a short 15 minute walk over to Kappabashi street which is known for it’s wholesale, yet open to public, restaurant supply shops. Kappabashi is great for housewares, knives, and restaurants supplies in general but of particular interest is the coffee equipment supply store and fake food display store. Perhaps after buying a few fake, but all too real looking, sushi, I would start my journey back towards the Sumida River and make my way south towards Kuramae Station. It may be time for dinner by now, and you can’t go wrong with Yuwaeru in Kuramae. If you do end up here, don’t forget to order the grilled brown rice topped with onions and miso paste (みそネギ焼おにぎり). After dinner I would head back towards Shibuya for drinks at either Fuglen, for some amazing cocktails, or Mikkeller for some of the best craft beer in the city. Of course this is but one out of a million options for things to do in Tokyo but, like an old trusty companion, this would be my default.