INTERVIEW with CHACE FEDOR from poweredby.tokyo 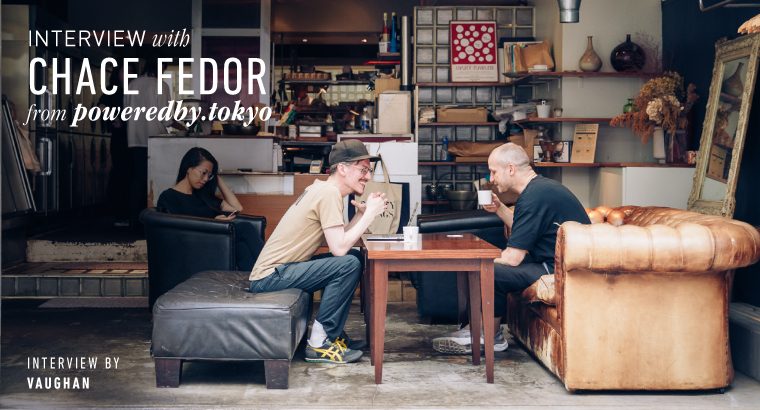 If I had a single yen for each time someone has asked me how on earth I found this coffee shop or this bar or this pizza shop or this garden, I’d have a lot (and I mean a lot) more money…. to spend on coffee. The answer to the question is a very simple one; someone told me about it.

Here is a new project called poweredby.tokyo (bookmark it now!) – where people tell you about the wonders that make Tokyo the best city in the world.

I caught up with Chace Fedor, Producer/Director of the project to find out all about it.

Vaughan: Congratulations on the launch of poweredby.tokyo, Chace. Tell our readers what it’s all about.

Chace: It’s a collective, community effort to capture and communicate Tokyo’s urban culture and lifestyle. Eyes are on this city, and we feel it’s important that the city and its people are faithfully represented. Through everyday people and partnerships with influential businesses and municipal government, the aim is to establish a strong identity in retail, hospitality, and fashion, and in turn build and establish an authentic brand around the city and its people.

V: How did the idea come about? And how long has it been in the making for?

C: Sometime late last year myself and Yoshi (monopo’s CEO) were having a chat over beers about how massive and diverse Tokyo is. How Daikanyama to Kagurazaka to Ginza to Akihabara to Koenji are more than just different areas or districts, they’re completely different planets, each with their own unique culture, from food to dress. And in most cases, are at most only a 15 minute train ride away from each other! There is no other place like this in the world. Tokyo doesn’t have the advantage of architectural heritage or ethnic diversity that other major cities do, but it has this outrageous level of urban diversity and sub-cultures. It’s the unique individuals that make up these neighbourhoods and sub-cultures that create this diversity. We want to give them a voice, a platform, to speak for their neighbourhood or their block, and establish their own identity as we welcome the world. Collectively they make Tokyo Tokyo.

V: Who are some of the “curators” – and what sort of people have been involved?

C: In the beginning we set out with the intention of painting a really round picture of Tokyo’s people and culture. But by nature of our industry and network of friends and colleagues, it definitely took a lean towards the creative community. This phase’s curators have been everyone from musicians to fashion designers, to magazine editors and business leaders. We are very fortunate and grateful to have some of Tokyo’s finest tastemakers join us, people that are genuinely shaping and pushing culture forward through their respective art or craft.

V: What type of places did you ask curators to introduce? Was there a criteria of some sort?

C: The cornerstone of the project is authenticity so naturally we wanted to give everyone the freedom to choose and curate as they please, but the reality is, at the end of the day, interesting content is paramount. The vast majority of the locations the curators picked were really interesting, which is expected considering how tasteful and discerning the Tokyojin is known to be, but from the beginning we have had a no chain rule, and as things progressed we had to curb hair salons and generic izakayas. We have to consider shootabilty.

V: What cafes have been introduced so far?

C: Too many to name. Some stand outs were AMP in Koenji, Kissa Nico in Setagaya, and Lion Cafe. It has been such an amazing experience having all these incredibly interesting people offer a window into their lifestyle through the places they partonize. You can really tell a lot about a person based on where they eat, drink, and shop.

V: Is there one cafe in particular that a curator introduced that you didn’t know before, and now absolutely dig??

C: So many. The beauty of Tokyo is the more you explore and discover, the more you realize you’ve only scratched the surface. For me, Lion Cafe was really mind-blowing. It was curated by Nic Liu, a music producer from Ireland. I’d probably walked past it a thousand time before finding out what was inside. It’s almost a hundred years old, run by a team of women of almost equal age. You can’t talk, you can only listen to classical music while facing the alter of massive speakers. Go before they raze it and build another Streamer…

V: Were there any places that curators wanted to introduce that couldn’t make the cut? Tell us why!

C: We were really lucky, almost every place accepted our request to feature them but unfortunately, there were a few places that declined. One of Tokyo’s crown jewels, ‘Gen Yamamoto’, politely declined, which I understand and totally respect, but still disappointing. Maybe for the better in the long run, it’s a really special place.

V: Who has made this project possible?

C: Quite literally everyone. The beauty of this project is that by nature, at its core, it is a collective contribution of an entire community. The amazing team of directors, producers, designers, and engineers here at monopo, to the brilliant photographers that graciously lent their time and talent. And of course the dozens and counting individuals that took the time out their busy schedules to give us a peek into their life. It’s such a beautiful thing.

V: What does the future hold for poweredby.tokyo?

C: It’s always been our intention from day one to keep the growth and participation as organic as possible, so our partnerships are strategic and carefully selected to match our objective and vision, such as our collaborations with Transit General Office and BEAMS. Being central to Tokyo’s people and culture using all forms of creative communication such as film, print, web, and photography is our future. It’s a bright one. Stay tuned.

V: Finally, if you were a curator for PBT, which places would you choose and why?

C: I get asked this a lot and I’ve never really given as much thought as it deserves. There are just so many amazing places in Tokyo, it’s so hard to narrow it down. Now I know the struggle of the our curators. Warm hospitality is important to me so Lotus Cafe in Omotesando is a place I frequent often for lunch. NARF in Aoyama. It’s like a neighbourhood pub for the local community slash hip hop heads and has a world-class cocktail program. It’s owned and operated by my good friend and super host, Meg. I really like the vibe at Ginza Music Bar, and only recently learned they are open in the afternoon for coffee and cake. Bonus. Nirvana New York for that all-you-can-eat Indian fix. La Jetee in Golden Gai as a Japanese cinema nerd. Aoyama Tunnel because actual good music is harder to find in Tokyo than you would think. I could go on forever. But there is nothing I like more than just getting lost alone at night in a unfamiliar area and exploring it, preferably in the rain.

this interview was conducted at Lotus Cafe in Omotesando