INTERVIEW with TAKASHI INODA of CAFE-MAGAZINE.COM 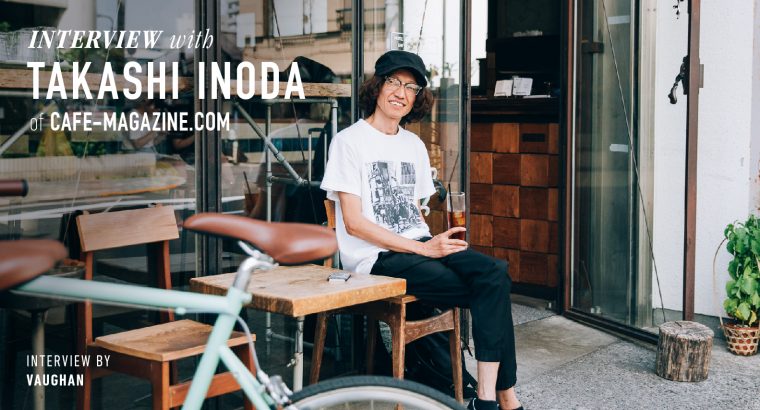 Inoda-san, tell us about how you got started with cafe-magazine.com. Have you always been interested in cafes?

Well, I was working at an advertising agency for about seven years. I was working with various clients across industries and one of my projects involved searching out cafes that we would work with. I ended up going to about 2000 cafes (in Kanto alone!) and discovered a lot of gems. I was on about 7 cups of coffee a day!!! After a while though, there was this feeling inside of me of wanting to do more for the cafe owners – and I felt like it was only going to be possible if I was completely independent. So, cafe-magazine.com was born… It’s no longer “business to business”… it’s more “person to person” if you know what I mean…

What do you normally feature on cafe-magazine.com?

I’ve featured 140 cafes to date, but my energy is not focused on this number or increasing this number. I’m more interested in the people that work at the cafe, the story behind the owner, and the types of events that are held there. I also feature various cafe bloggers and writers who share their passion through their blogs and photos. For anyone who wants to work at a cafe, I sometimes introduce cafes which are recruiting too. But more than anything else, it’s a site for people who like hanging out at cafes…

Why are cafes such a special space for you?

Well, I remember after the big earthquake hit Japan… A lot of people were anxious and nervous and didn’t want to go out much… a lot of businesses struggled during that time. Surprisingly, cafes had become a kind of go-to place during this time – I’d go as far as to say a lot of business had picked up — cafes really became that setting where real communication took place, and a place where people offered advice, help and new friendship. It really made sense then; cafes sure are the home away from home.

I remember that too… Can you tell us about a couple of cafe stories that you hold dear to yourself?

Well, about a year ago, I remember going to a cafe… and the owner introduced me to a staff member, and when she heard that I was from Cafe Magazine she told me that she found the job through my site. She was so thankful.. and it was a moment I will never forget. After 3 or 4 years of running the site, I finally felt that I had become this bridge… And that’s happened a few times since then…

That’s great. Yeah, sometimes online can be a lonely place, and it’s difficult to know whether your stuff is actually getting out there.

Yeah, everything hits home for me when I get that sort of feedback…

What’s another story that puts everything into perspective?

Another thing that’s often on my mind these days is that a lot of the people I meet when I go around to cafes are actually people very similar to me. We were working full time in a different industry, and we have all reached a stage when we realized that we wanted to do something different…. felt like we could make a better place… and we turn to the cafe world… I like to hear and tell these types of stories…

Is there a cafe in Tokyo that appeals to you the most?

Let’s see… Well, the first place that comes to mind is Nui in Kuramae. It’s so interesting there. It’s not just a cafe. It’s a hostel where a lot of people from all over the world gather. A lot of locals hang out there too. It’s an interesting mix – like a whole new world.

Being at Nui reminds me of when I lived in Toronto. I spent a lot of time hanging out at cafes. A lot of people were striking up conversations with others, and I would often make new friends from all over the world. I don’t know how to put it exactly, but when people from all over the world gather, it really makes you feel that we’re all the same… it’s really so peaceful… the way the world should be.

Finally, I heard that Cafe Magazine also released a CD with music for cafes to use… Tell us about it!

Yes! In 2012, I released the first volume with some of my favourite tracks. My idea was for it to be background music in cafes, but actually a lot of other businesses like hair salons, fashion retailers play it now too. hahah.

How can people buy it?

You can purchase it through iTunes here -> https://itunes.apple.com/jp/album/unrapped/id561391175

Thanks for your time today, Inoda-san. Thanks for sharing the coffee love. I hope your site continues to be the birthplace for a lot of interesting projects such as this!

You can connect with Cafe Magazine here