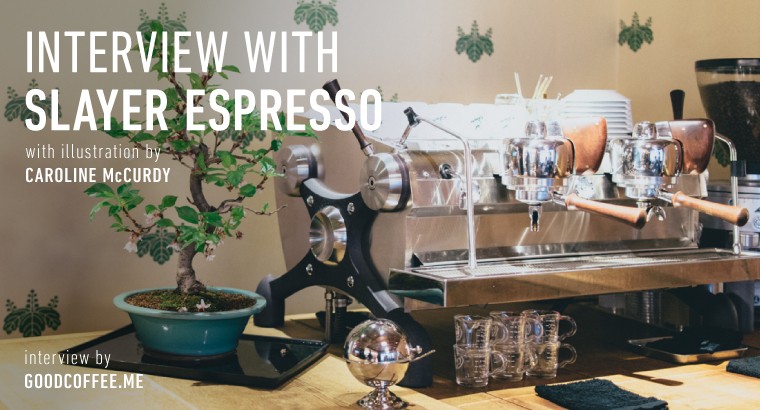 We interview Brandon King, Global Sales Manager of Slayer Espresso – one of the coolest espresso machines going around…

Good Coffee: Can you give us a brief history of slayer? When and how did this amazing product come about? Who’s the genius behind it?

Brandon King: Slayer is part of a long history of one family in the coffee industry. Jason, its original creator and the company’s CEO, grew up in a roasting business and became involved with many aspects of it: sourcing, sales, service. Eventually, he got to the point where his ambitions outgrew the machines that were available, so he got to work on his own.

GC: What makes the slayer unique compared to other espresso machines?

BK: Most fundamentally, Slayer controls the flow rate of water in two stages of espresso extraction. It offers a pre-brew function that allows for what we call “flavor profiling” and tolerates a finer grind setting than any machine on the market. Our custom options are one-of-a-kind, too.

GC: Has the designed changed much since the start? And what’s the vision for the future Slayer? More or less of something?

BK: We’ve built 3 versions of our 2- and 3-group machines, but most changes were internal. The designer that we’ve worked with since the beginning is still part of our team, so there’s been continuity in our aesthetic for all of these years. That part of our identity is pretty established, for now and for the future.

GC: I heard that each slayer is customized for each shop in slight ways? Can you tell us about some of the unique slayers that are out there in the world? The gold one at Fuglen Tokyo is divine.

BK: Though we keep an inventory of classic machines for quick fulfillment, customization is a big part of what we do. Glass, gold, leather, and wood have been incorporated into many designs. Personalizing with custom logos adds a really cool touch, too.

GC: How much is a Slayer? Is there a range?

BK: We sell all over the world, in various currencies and through various partners, so there really isn’t one price. Slayer has been high-end since its inception, even before other manufacturers had a “premium machine”, and is priced competitively with the top-of-the-line models from other companies.

GC: How many slayers are in Japan? And which countries are home to the most? We guess Australia, the US and South Korea.. in that order!

BK: We sell pretty well all over Asia, and Asia Pacific. While we do not keep official counts of Slayers in each country, we are well represented in all 3 of those countries.

GC: Any other news or gossip or anything that’s exciting going on in Slayer headquarters at the moment?

BK: There’s always something exciting going on! Our machines are continually being improved and new options for customization are being added all the time.

GC: Thanks Brandon for your time! We look forward to many more Slayer-pulled espressos! And thank you to the one and only Caroline Alexandra McCurdy for your Slayer illustration!