THE LAGERPHONES TALK COFFEE IN TOKYO 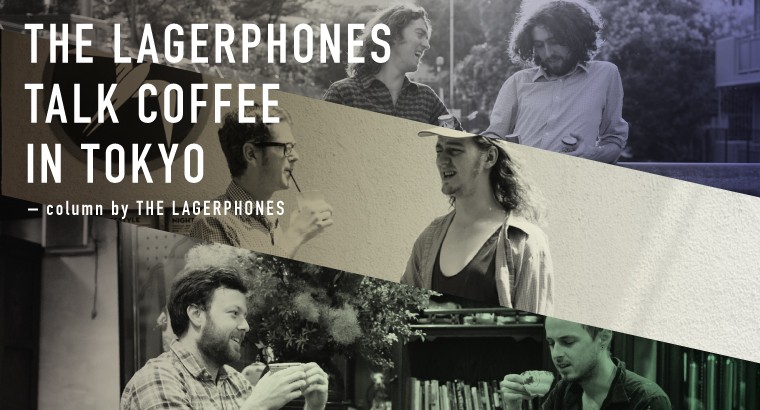 The Lagerphones are a party jazz band from Melbourne Australia – and have just finished their Japan debut tour. They did twelve shows in ten days – with a lot of them in cafes where a ‘live’ isn’t normally held. They played at Nui hostel, Fuglen, Davide Coffee Stop, as well as joining Little Nap’s yearly festival YO!YO!GIG. We caught up with the six members and asked them to write something about coffee in Japan. They’ve written about old kissatens, third wave coffee shops and canned coffee.

a peasant watches / the master, his native tongue / spoken in silence

stare into a cup / old flavors produce / something unfamiliar

Since moving from my hometown of Adelaide, South Australia to the ‘coffee capital’ of Australia in 2012, I’ve been inundated with hip little cafés and coffee shops all claiming to make the best coffee, with all the various different brewing techniques and that are able to smash out a bazillion coffees a minute. Heck, even I’ve been converted in to a coffee loving fiend that has spent many hours of my life trying to master the aeropress with a cupboard full of scales, filters, grinders etc… The whole concept of Satei Hato has totally knocked me out. Here the main emphasis is on the whole ritual of coffee making, taking the time to create the perfect balanced drip coffee (pour over) with aged beans. (Yes. That’s right, AGED beans). The whole spectacle of the ritual is quite a sight. All the movements and techniques of the masters here are meticulously thought out and used to create such an awesome experience. This place is badass.

One of the first things a tourist in Tokyo becomes aware of is the haphazard but ubiquitous vending machine coffee. At any time of the day, anywhere in Tokyo, you can have a quick can of caffeine for about a dollar, without being expected to pick between exotic beans and trends for the benefit of pretentious, indifferent baristas back home. In Japan, the baristas are warm and friendly and the coffee delicious, but sometimes you just need a quick hit.

With the first sip I’m taken back to my childhood. The UHT milk reminds me of ski trips with my family, bringing a sense of comfort and familiarity. The sweet, milky allure with a distinct coffee hit, is surely enough to satisfy any child…and adult! It may not provide the complex flavour or depth of a quality espresso, but neither the Wanda or Emerald Mountain are aiming to achieve this. These are not for the connoisseur. It’s a comfort drink for the average person on their way to work, or one who just needs a little pick me up while out and about. As you come to the last sip, you will no doubt be left with a cheeky smile!

Living in Melbourne, there certainly is no shortage of excellent third wave coffee to drink. The experience we had at both Fuglen and Omotesando Koffee however was something completely unique and memorable. The Norwegian decor of Fuglen is immediately striking after walking in from the streets of Shibuya and the beautiful warm wood is gorgeous minimalism at its best. In Melbourne, wood is very much in vogue, but this is something else entirely. The most incredible thing about Fuglen and Omotesando Koffee is the absolute precision and perfection that every part of the coffee making process is subjected to. Everything is done with such care and attention to detail that it is almost hypnotic to watch your coffee being crafted.

In Melbourne there is a cafe on every street corner, serving barista made coffee of all varieties, and sometimes it feels like they’re all the same; converted milk bars ( Australian convenience stores ) full of people who look like they’d rather be somewhere else. Walking into Fuglen gave me a distinctly different feeling; the furnishings were beautiful, the staff were friendly, and then when I tried the coffee….. The coffee was better than 90 percent of the coffee in Melbourne and I didn’t feel like I had to avoid eye contact with the Barista as I left. Melbourne has a lot to learn from Tokyo about coffee! (P.S my favourite at Fuglen is the Iced double latte!)