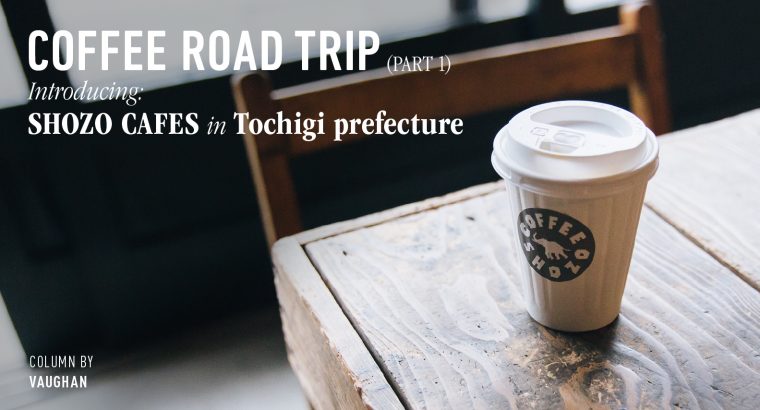 I was looking through old magazines at a store in Shiomokitazawa when my eyes landed on a rare 1995 Brutus Magazine edition titled: “Garcon! Un cafe, s’il vous plait. カフェに行こう”. Featured content on the front cover – “TOKYO CAFE LOVE STORY” and “Cafes are Culture!” — successfully enticed me to acquire the rare copy even before peeking inside.

I spent all of my free time over the next week looking through the magazine; a real trip down cafe memory lane. Unfortunately, my eager attempts to look up and become a patron of historic cafes resulted in disappointment, as most establishments for some reason or another are no longer.

I was excited when reading about two cafes in Tochigi prefecture: “The owner, Shozo-san, biked around Hokkaido for a year while learning to roast coffee, before coming back to his hometown of Nasu to set up his own cafes.” The owner is then quoted: “I decided not to have a counter at my cafe. Everyone should be equal.” I remembered the quaint, and also counter-less Shozo Cafe in Minami Aoyama and decided to stop by to speak to Mio-san to find out whether NASU SHOZO CAFE & 1988 CAFE SHOZO were still flourishing today. “Yes,” Mio-san said, “they sure are!”. To have a chat about all things Shozo, we arranged to meet with Kikuchi Shozo – the founder of the Shozo cafes – in Nasu, about a 3-hour drive north-east of Tokyo… カフェに行こう!

It was a rainy start to the day. We decided to try the coffee and scones at NASU SHOZO CAFE first, before heading to 1988 CAFE SHOZO where our meeting with the owner would take place in the afternoon. NASU SHOZO CAFE was as relaxing as we imagined; modern with a tranquil atmosphere surrounded by lots of greenery. Natural light shines through the stain-glassed windows. It feels more like a home than a cafe.

The rain began to ease, and I noticed one of the staff outside mopping up water on the deck. He didn’t look that old, but the age thing is always hard to tell. Could be 20, could be 40. The way he was sweeping reminded me of the day I got married; when I remember being fixated with the staff raking the grounds at Meiji Shrine. The way of sweeping seemed so methodical that it resonated meditation of some kind. I decided to go outside, shake his hand, and start the interview there.

Let me introduce you to my new hero; Hitomi-san. It turned out that Hitomi-san had just come back from visiting 300 cafes in Europe, walking from cafe-to-cafe through Spain, France, Italy and England, keeping the money that he had in a pouch in his pants. “My beard got really long, and as time passed I started to look a bit grubby. I was actually refused entry at one really classy cafe. That cafe was on the top of my list so I went out, shaved my beard, bought some new clothes and went back the following day. It was one of the best coffees I’d ever had.”

With the intention of finding out about some of Europe’s hidden gems out there; I asked him where his favourite cafe of all was. “Oh, that’s easy,” he said, “here! Shozo!”. I let his answer slide because Shozo was quickly becoming my favourite cafe too. Sadly, our conversation was cut short as it was already time to head off to meet Shozo-san. It was a 20-minute drive to 1988 CAFE SHOZO.

After getting out of the car, I found myself standing next to a vegetable stand, unstaffed. Shozo-san appeared, introduced himself and said: “A former staff of mine has their own vegetable garden and sells their vegetables here every day. It’s a trust system. You put your money in the box… and then you take your vegetables.” I buy some vegetables to take home and when dropping the coins in the box I ask: “Don’t people sometimes…you know…?” He understood my question before I could finish and laughed; “No, that doesn’t really happen…”

We’re on a little tour, and there’s a lot to see! We go upstairs and are shown a second-hand bookshop with various clothes on sale. There’s a calmness here that is so beautiful. “This section is run by another former staff member of mine.” says Shozo-san.

We head through some doors on the second-floor to a beautiful space where gigs are sometimes held. This room holds about 200 people. I would love to hold an intimate music event here one day. I imagine fairy lights draped around the room and bouquets of flowers attached to the microphone stands. The room evokes these ideas.

Downstairs, through these glass doors, there is an open space. It seems that various markets are held here through the year.

It was quickly making sense. It all started off as just the cafe, but it has since multiplied and is now more of a mini-village consisting of shops, stands and galleries that are all independent yet so connected, as the people running them once worked under Shozo-san and clearly share his spirit.

According to Shozo-san, it’s not something that he does consciously. It’s kind of just innate for him to want to keep good relationships with his past staff in the area of Nasu, where he has spent most of his life. He was born and raised about 20 kilometres up the road from where the cafe is located. He said there are bears, monkeys and farmers – that’s about it. “Farmers use what they have around them to make something to be able to survive. I am not a farmer, but that’s the same philosophy I’ve had when making my cafes.”

I asked if he had foreign in Japan. “I’d never been overseas before opening this cafe. After opening, I had an urge to go to Europe to see how they did things there. Europe had always been so attractive in my mind. Of course, there was no doubting that I was impressed with the feeling of freedom at cafes throughout Europe. This feeling of customers being really relaxed at tables and chairs lining the streets… I kept seeing people just looking up at the sky and I could really sense that they were thoroughly enjoying the days of their lives. But to be honest, the way the food and coffee tasted wasn’t anything to write home about. So, I took away that I wanted to create a place in Nasu that embodied that feeling of freedom like they have in Europe, married with good quality food and coffee that Japan is so renowned for.”

I ask about the customized roaster next to us, and compliment him on the coffee, as it really hits the spot. He tells me that he is actually yet to start using his own roasted beans in the cafe…and that he is still in the practising stages. I mention that I remember reading in the 1995 Brutus magazine that he’d been around Hokkaido learning to roast a year before opening. “Yeah, I’m still practicing…I think I’m getting closer… but I’m still not ready yet. If I could only roast like they do at Stumptown… those beans really are my favorite.”

I ended up taking some of those beans home. I brewed some for my wife, and we sat down to talk about all things Shozo. She mentioned that it sounds like the perfect road trip from Tokyo, and that we should visit during Christmas and the New Year. She read my mind. See you again soon, Shozo.