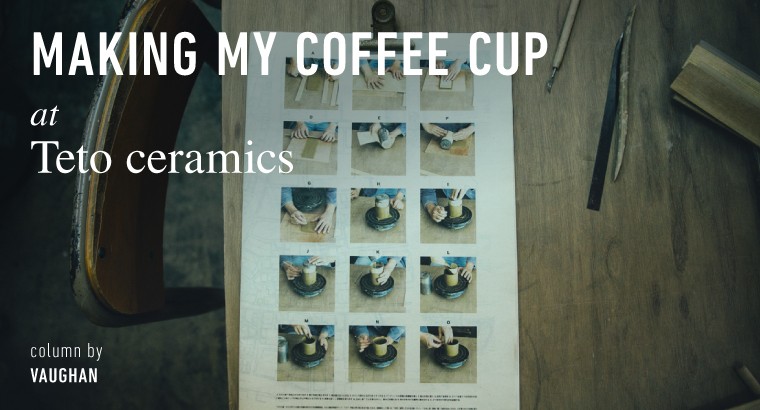 I switched on the TV and landed on something fascinating. There was a lot of big machinery hard at work in various factories across Japan showing how products are made. Robotic hands cracking eggs, bean sprouts being grown, the bristles of toothbrushes being inserted, pencils being sharpened. There were fifty-four items in total. Fascinating as I had never considered how all these items I regularly consume were ever made – and yes, on the one hand it was a tad scary to see robots making millions in minutes and yes, as cliche as it sounds, the love was definitely lacking. But that aside, I couldn’t take my eyes off the TV.

It was very timely – as I had just on that very day taken part in my first ever ceramics class – a private lesson in making my own coffee cup. I’d never done any type of ceramics or pottery before, and to be honest, besides the scene from GHOST (how good is that scene) I didn’t have a single clue as to what to do.

At the beginning, I was a whole mixture of nervousness and awkwardness. My fingers, muscles and thoughts had never operated in this way. I was trying really hard to think about everything… I was trying to be good.

After about 10 minutes, my instructor Aoki-san knew exactly what I was doing wrong. “Vaughan-San – remember – Don’t Think. Feel.” I stood up, shook myself, cracked my neck (I wish I could make some sounds when I do that), ran my fingers through my hair, took a deep breath – and felt excited to not have to think.

I started to get a feel on how this was done. And throughout the course of the next two hours I went through the process of making a coffee cup.

Clay was measured and formed in a rectangular shape. A thin layer was sliced using wire. I wrapped the clay around a cylinder-like object. The edges were joined smoothly. Another layer of clay was put underneath and I cut out a round shape to form the bottom of the mug. Again, the edges were joined smoothly. A nice mouth rim was formed. I then attached two pieces to form the unique handle.

Finally, I engraved something in the bottom of the cup – something important that I learned on that day.

Loosening those new muscles I indulged in a new experience. It was all new, and senses that I never knew I had inside of me were beginning to show themselves. I remembered back to the beginning of my coffee journey. It really wasn’t until someone came over to my house (Thanks Miki-san!) and actually showed me how to brew a cup of coffee using a V60 pour over that I really began to love the drink. It’s taken me a while (it always takes me a while…) but I think it’s all starting to make sense. You have to go to deep down to the root of something to begin to understand and appreciate it. Besides, you really need to go through the motions yourself before you can have proper judgement.

Fast forward two weeks – and I go back to pick up my cup. I can’t help but smile. My own coffee cup. I have a chat with Ishii-san, the owner of Teto Ceramics. And I tell him that it looks like I was wrong. My coffee mug can stand up straight, and that it looks like coffee won’t drip through the cup! Seriously, I was convinced I wouldn’t be able to do it. But I did it! And as I write this, I look at my coffee cup, and I look at the unique handle it has and I’m a new man.. more inquisitive than ever! Bring on more learning this year!

===
Teto holds workshops three times a week in Meguro, Tokyo.
Being able to speak a little Japanese is preferable – but you can get by with English.
More feeling and less thinking is strongly advisable.
See their website (http://teto-net.com)  for more information, or drop in to meet Ishii-san for a chat anytime.