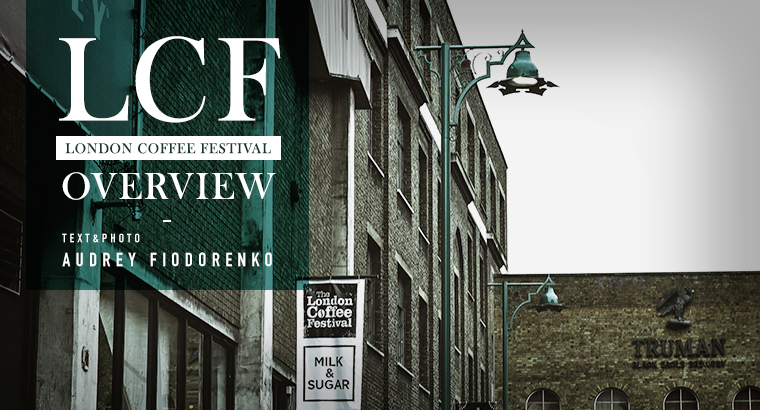 The first part of the festival was held on 30th of April and 1st of May, fully dedicated to coffee industry. Public sessions that were focused on coffee consumers were held on  weekend 2nd and 3rd of May in Old Truman Brewery, on the buzzy Brick Lane Road. The spacious loft was divided into four main areas that were named under the London famous areas, such as Soho, Shoreditch and Hyde Park.

Compared to previous LCF, there has been more focus on the beauty of filter drinks this year. A great number of seminars, workshops and showcases were dedicated to v60 filter, the craft of AeroPress and Chemex. LCF guests could also gain more knowledge about artisan tea and chocolate taste notes with the help of favorite brands like Teapigs, The London Tea Company, Lindt and Green & Black’s Organic.

La Cimbali this year taught the science behind coffee art and the right way of achieving natural sweetness from coffee beans. Baristas at La Cimbali’s Espresso Bar presented visitors with coffee tasting sessions about the manipulation of coffee flavor from the first stage through four different brewing methods.

The Union Hand-Roasted Coffee was in charge of unfolding the art of coffee tasting. While coffee tasting seems to be challenging, LCF proves it is something that can be learned by anyone. This year, Union brought back its Pro-Amateur Flavour Challenge to the festival, teaching the nuances of taste notes and how to identify them in a cup of coffee.

Make Decent Coffee Lounge attracted a lot of attention as guests were particularly interested how to brew a nice coffee at home. ThreeSixty° baristas helped to brew a perfect, yet simple cup using the v60, as well as other filter options. Probably one day in the festival was not enough to become a coffee pro but a few tips on barista-worthy coffee could be taken easily from the festival.

The Lab programme this year had a lot of excellent choices for those who wanted to expand their knowledge of coffee and more. Assembly Coffee showed how to create a balanced espresso blend, Sandows London shared their secrets of a perfect cold brew and Ben Morrow demonstrated some complex designs of latte arts and explained the development of free pour.

Throughout the London Coffee Festival, baristas looked at the importance of the vital ingredient, water and its quality in coffee. Moreover, The Coffee Art Project raised funds for Project Waterfall. This project is in the heart of the UK Coffee Week (4-10 May), which aims to bring clean water to the communities that grow our coffee.

Hosted for the first time in the history at The London Coffee Festival, the best international baristas gathered to compete for the prestigious title. The competition that made other coffee events jealous was highly professional and entertaining. Coffee industry professionals, Victor Frankowski and co-founder of Sprudge.com Jordan Michelman, hosted Coffee Masters and guided the audience through all the competitive coffee clashes.

Well-known international baristas demonstrated their passion and discipline in fast-paced and innovative tasks, from cup tasting challenge to an extremely stressful test of 10 espresso-based drinks in nine minutes. After the head-to-head competition, Swede by way of Berlin Patrik Karlsson (Five Elephants) and UK’s coffee expert James Bailey (Workshop Coffee Co) made to the finals.  After nailing the cupping discipline with getting all the cups in the right order, the winner of the Coffee Masters is the former UK Brewers Cup champion, James Bailey. The success of inaugural Coffee Masters suggests that we might expect this kind of knock-out format competition in the next year’s London Coffee Festival.